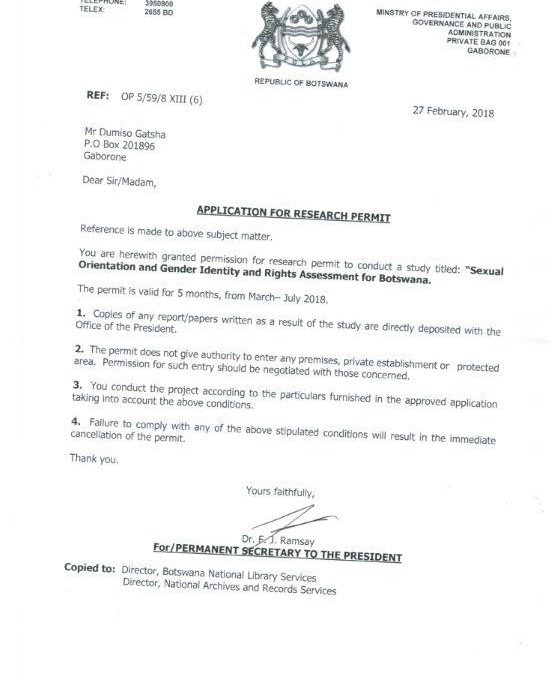 Completed in July 2018, amidst the winding down of the UNDP Botswana HIV programme. All local project related staff working on the project had moved on. Several attempts were made at different levels in vain. This reflects how institutional racism erases and misplaces our existence as queer folk navigating development. It has been more than two years since, with multiple efforts made to bring this to the world. This study was approved by the highest office in the country; The Office of the President of the Republic of Botswana.

Sexual Orientation and Gender Identity and Rights Assessment for Botswana

Botswana is celebrating 52 years of independence in September 2018. Regarded a post-colonial rarity in Africa,1 Botswana is known for peaceful transitions of leadership, successful multiparty elections and economic prosperity. Progress has been made in health advancements, education and women empowerment. Development aspirations continue to drive the discourse in current affairs issues. This discourse also speaks of challenges facing the country. These challenges include high levels of unemployment, governance challenges and the HIV/AIDS response. Public health is the only field in which the human rights of sexual and gender minorities have been acknowledged and discussed politically, in literature and within civil society. This assessment intends to expand on this discourse with a look at case law, captured community experiences, variant stakeholder perspectives and a broader outlook on the human rights situation for Lesbian, Gay, Bisexual, Transgender, Intersex, Queer, Gender Non-Conforming and Other (LGBTIQ+) people within the diversity of sexual orientation and gender identity (SOGI) and to a limited extent, sex characteristics. For purposes of this assessment, LGBTIQ+ people and sexual and gender minorities will be used interchangeably.

5. Context
Homosexuality and Bisexuality are not illegal in Botswana.2 The highest court in the land declared that there is no evidence showing homosexuality can be learned, imposed or that it is unnatural.3 However sections 164 and 167 of the Penal Code 2 of 1964 outlaw same sex activity in the form of ‘carnal knowledge against the order of nature’ and ‘acts of gross indecency.’4 This is often articulated as homosexuality and other dimensions of sexual identity and diversity. The possibility of persecution remains despite the penal code not…